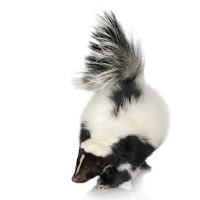 Fall is in the air. Unfortunately, along with the scent of pumpkin spice lattes and wood-burning fire pits comes — pee-yoo! — the unmistakable stink of skunks. It seems like I’ve caught a whiff of the unpleasant aroma almost every day this month!

So what gives? Turns out that skunk babies (a.k.a. kits) that were born last spring are starting to venture out on their own for the first time. And the inexperienced adolescents are a little jumpy around dogs, cars, people, and other perceived dangers.

When they’re confronted by a human, or any other critter for that matter, skunks would much rather flee before they launch a fragrant attack. When a skunk feels cornered or threatened, he’ll stiffen up his front legs, stomp them, and shuffle backward a little. He may also hiss and growl. When you’ve been issued that warning, just back off quickly and quietly, and the skunk may retreat, too. Otherwise, the little stinker will throw his body over his head and — still facing you — let ’er rip!

If your dog tangles with the wrong end of a skunk, don’t panic. Just saturate Fido with full-strength mouthwash, carefully avoiding his eyes and ears. Then wash him with a good dog shampoo, and rinse thoroughly. Fresh out of mouthwash? Don’t worry—this alternative formula is just as effective:

Note:These two remedies work just as well on humans as they do on pets. As for your clothes, take them to the local laundromat and toss them in the washer with an alkaline detergent.

More to explore at: